Yeah, you are right, this time we are presenting ‘Harry Potter and the Half Blood Prince’, the sixth film of Harry Potter series, for you. Like the previous ones, this movie also wins the teenage viewer’s heart as well as the fantasy lovers. It broke the record for biggest midnight showings, making $22.2 million in 3,000 theatres and beat one of the previous record-holders ‘The Dark Knight’ which made $18.5 million only one year earlier. The eye-dazzling data proves the popularity of Harry Potter once again.Like always, Harry and his friends are fighting with wizards using magic spells. Harry is reluctant to return Hogwarts because of the bad experience at the Ministry of magic with Voldemort. Dumbledore takes Harry to Slughorn, a former professor and hopes Slughorn would take Harry under his wing. Meanwhile, Death Eaters begin to wreck havoc both Muggles and Wizards. The school is under tight security so that the Death Eaters can not enter the school. Harry and Ron are to take an unexpected course to take up potion from Slughorn. Harry’s book, “The Half Blood Prince” is annotated with additional instructions and spellcraft that allow Harry an edge over the other students. 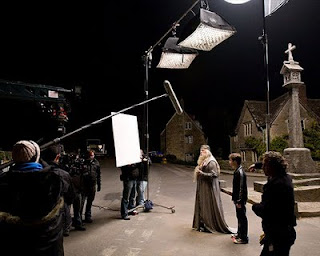 Meanwhile, Ron becomes a Quidditch hero and forms a relationship with Lavender Brown. This makes Hermione brokenhearted. Harry is also upset because of Ginny’s attraction to Dean Thomas. During the Christmas break, the Death Eaters come to kidnap Harry but failed as they are outnumbered by Order of the Phoenix members. In the meantime, Harry continues to be suspicious of Draco’s actions. Harry believes Draco to be behind two indirect attempts on Dumbledore’s life and one is revealed accidentally by Ron. During a confrontation with Darco, Harry casts a curse from the Half Blood Prince book that harms Darco much.

Dumbledore implores Harry to help him recover another Horcrux, the location of which he recently learned. Deep inside a seaside cave, Harry is forced to make Dumbledore drink a liquid. Soon they are attacked by numerous inferi so the two return to the Astronomy Tower at Hogwarts.

Dumbledore tells Harry to fetch Snape for help but Darco appears and reveals that Voldemort has chosen him to kill Dumbledore, Harry hides himself before his appearance. Meanwhile, Bellatrix and other Death Eaters are able to invade Hogwarts and join Darco. What will Harry do now?

Daniel Radcliff acts as Harry Potter like always. The film is directed by David Yeats who also directed the fifth part of Harry Potter series and will direct the next episode titled “Harry Potter and the Deathly Hallows”. Although filming begins in September 2007, it is released in July 15, 2009 and earns attention of the viewers. It is mostly shot in UK like the previous five films but the winter scenes are shot in Scotland. The budget was about $250 million, however, it earns more than $800 million.

So, hurry up to get a DVD and start watching the movie.

2 Comments on “Harry Potter and the Half Blood Prince”